Database Availability Group (DAG) is the new high availability solution in Exchange 2010. None of the clustering technologies in 2007 is valid in 2010.

DAG is a collection of upto 16 mailbox servers with a maximum of 16 copies of each database. It makes the database independent of any server and gives us failover on a mailbox level rather than a hardware or storage group level as in 2007. To illustrate it, if one database gets corrupted or the disk having the files fails, you can quickly mount a copy of the same database in any of the servers which is part of the DAG.

Follow the steps to create and configure a DAG.

You need to specify the name of the DAG (this will appear in EMC), the file share witness unc path (similar to 2007) and the location of the FSW folder. Exchange will create the folder and hence specify the path as to where you want the folder to be. Microsoft recommends to have the FSW on a hub server. 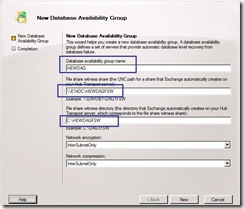 Click New and Finish. You will see that the DAG is now listed in EMC. 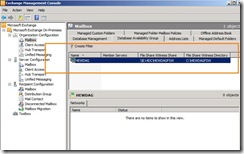 The creation of DAG will only create an AD computer object, which is visible in AD Users and Computers.

Just having a DAG created is no good to us. Now, we will add the first node to the DAG. Right click the DAG in EMC and click on “Manage DAG Membership”.

Select the first server to be part of the DAG and click Manage. 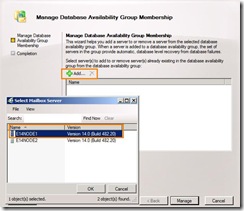 Using the console for adding the first server gave me the error below stating that “Insufficient permissions to view the network shares on the machine, Error Code 5”. 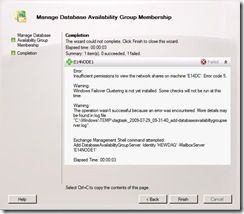 The problem here is that remote powershell is used in the background which is causing the error. It is a known issue and should be corrected in the final release. I launched the Local Powershell and ran the same command which the console ran and everything was fine.

As you can see, the shell installs Windows Failover Clustering as part of configuring the server to be a member of DAG. You don’t have to install clustering before hand as the process will go ahead and install if it is not present. This is good for admins who are not that comfortable with configuring the cluster themselves, like CCR in 2007.

Once the server becomes part of the DAG, more information is made available in the console. 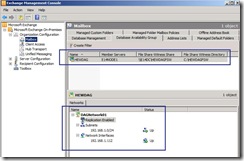 The failover clustering quorum settings will be set to “Node Majority”. 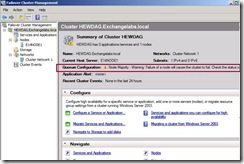 Once the second node is added, the quorum setting is automatically changed to “Node and file share majority”. 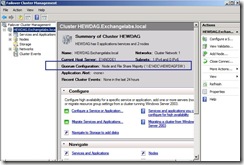 The file share witness is only created once the second server is added to the DAG as the quorum setting is only changed at that time.

The EMC will now show both the servers as part of the DAG in the EMC. 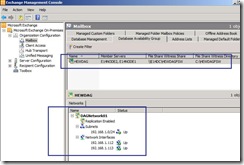 That is it. We now have a working DAG. I will explain the database copy and failover functionality in a different article.