Hierarchical Address Book (HAB) is a new feature introduced in Exchange 2010 and only comes into action when Outlook 2010 is used. All of us are used to the traditional address book model. With HAB, users can browse recipients by using Organizational hierarchy. Once properly configured, HAB gives a true picture of the company structure in terms of different departments, who heads different departments etc.

It is not a feature which is useful for all companies. It doesn’t give any added benefit than exposing the hierarchy to the end user, that too only when viewed using Outlook 2010. Implementing HAB needs a full understanding of the company structure. In my lab, I have set up HAB for How Exchange Works for demonstration purpose.

By default, HAB is disabled or not configured. Issuing the command Get-OrganizationConfig | fl hier* will show that the hierarchical address book root is empty. The company hierarchy is configured using distribution groups. Hence, a distribution group has to be created for the root (company name) and every department/branch the company has.

In my lab, How Exchange Works has HR, IT, Marketing and Sales as the main departments. Within IT, there are Exchange Team, Unix Team & Network Team.

First step is to create an OU which will hold all HAB objects. Although it is not mandatory, it keeps the OU structure clean. I have created an OU called “HEW HAB”. 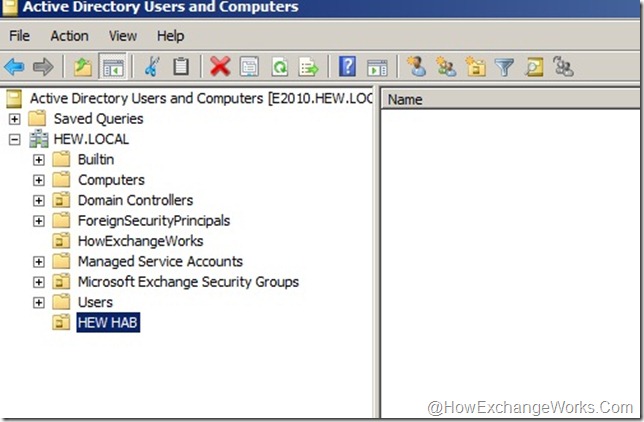 Next, create distribution groups for each of the departments. You can use EMC or Shell. Below screenshot shows the group I have created for the company name (address book root). 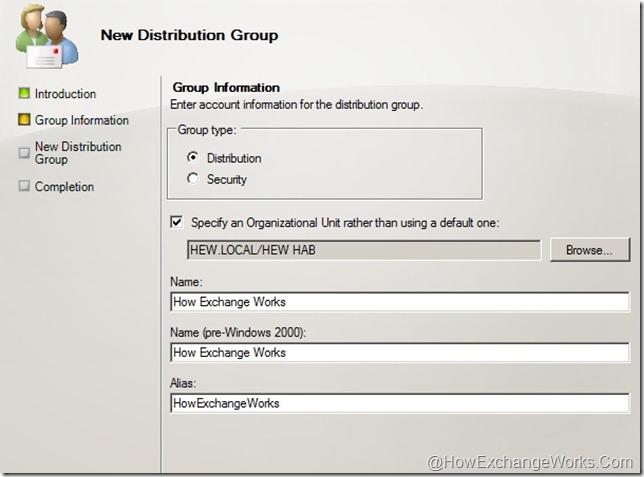 After the groups have been created, stamp them as hierarchical group. As I have an OU for HAB objects, it was easy to filter the groups.

Next, set the HAB root (How Exchange Works in my case) using the command below.

If you launch Outlook 2010 and click on “address book” now, you will see a new tab called “Organization” and How Exchange Works listed as the root.

Now, the company hierarchy has to be configured by creating the different departments as member of the root group. In my case, I added IT, Sales, Marketing and HR as members of the distribution group “How Exchange Works”. You can use either EMC or Shell.

Next step is to add the different teams into the department groups. In my case, Exchange Team, Unix Team and Network Team were made members of IT. That completed the hierarchy for my lab setup and the address book updated the changes. 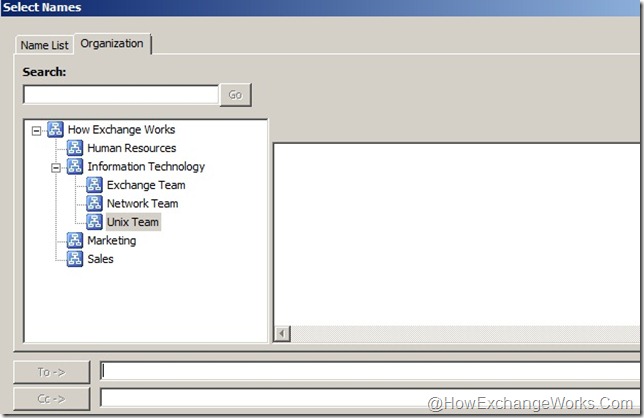 In order to have users listed under teams/departments, add users as members of the corresponding groups. In my case, I added three accounts into Exchange team. The users get listed in alphabetical order by default.

That won’t be a true reflection of hierarchy in any company. Hence, in order to list the users in the order of the position they hold within the company, an attribute named “SeniorityIndex” has to be populated. The higher the seniorityindex, higher the priority.

I added seniorityindex to my three accounts using the following command.

My address book reflected the changes for sure! 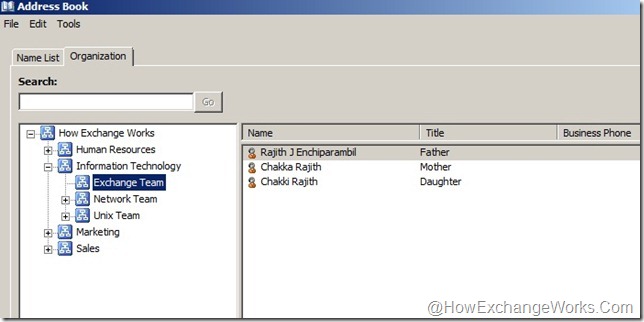 In a large company, setting up HAB will be a time consuming exercise. It is upto the company to decide whether they have the man power for it and if it is needed at all in the first place!