I had blogged sometime last year as to how to move the HUB transport database (mail.que and associated files) to a different location, read here. I was at a client site today and tried the same script & parameters (.Move-TransportDatabase.ps1 –QueueDatabasepath “path” –QueueDatabaseLoggingPath “path”), but it failed.

I gave the Temp folder path and the script worked perfectly. So, the command to move the queue for Exchange 2010 SP1 server is as follows. Note that it has to be run from the scripts directory. 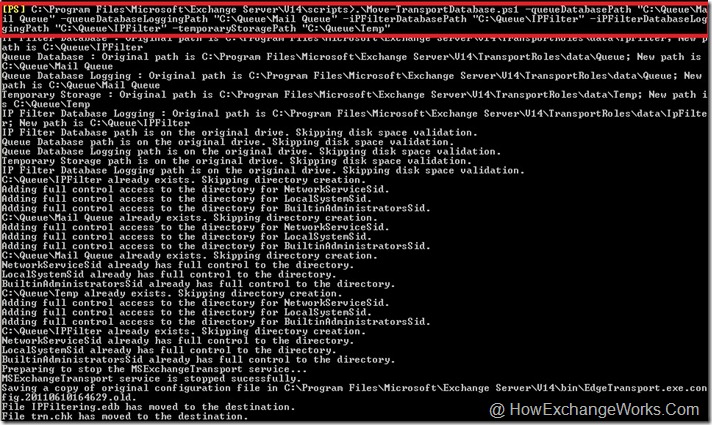 A quick look at the Exchange 2010 SP1 folder structure for transport database has IPFilter, Queue and Temp folders.

You can edit the “EdgeTransport.Exe.Config” file in the Bin directory to change the queue location, but it doesn’t move the existing queue and the Transport service has to be restarted manually.

Running the command “.Move-TransportDatabase.ps1 –QueueDatabasepath “path” –QueueDatabaseLoggingPath “path” works fine in Exchange 2010 with Update Rollup 5. So, the change in using the script only affects 2010 SP1 deployments.