Exchange 2010 brings a new feature called “Single Item Recovery” as part of Microsoft’s vision of backup-less messaging environment. The recover deleted items feature in previous versions of Exchange has been given a face lit and a new folder called “Recoverable Items” exists in a 2010 mailbox to assist with recovering deleted emails. The “Recoverable Items” folder has three sub-folders called Deletions, Purges and Versions. It is the “recoverable items” folder and sub-folders that make single item recovery possible. 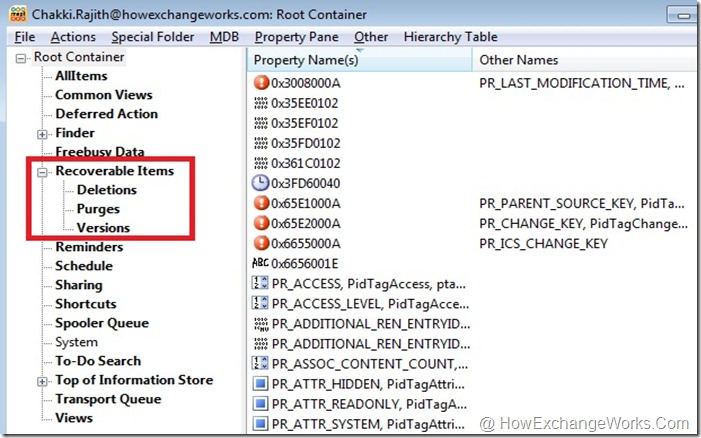 I have been to customer sites where they had already paid for the storage necessary to facilitate the single item recovery feature, but they were not using it. They didn’t even know that they had bought storage required for this feature as well. Microsoft Exchange 2010 Storage Calculator has this option enabled by default and most of the architects calculate the storage required with this feature enabled.

Yet, companies are unaware of this feature. This comes in handy even if you are backing up your databases. In simple words, single item recovery makes it possible for a user/administrator to recover any emails that have been deleted (intentionally or not), as long as the recovery is done before the deleted items retention window is up. What is new in this, you may ask? The change in 2010 is that you can even recover emails that a user has purposefully deleted, even from “recoverable deleted items folder”. This means that the user has deleted the emails in “deleted items” folder and went into “recoverable items folder” and purged the emails to make it impossible to restore (unless from backup) in previous versions of Exchange, but not in 2010.

If the user deleted the email as soon as he had received it, then the emails won’t be in the backup tape either. But with single item recovery in Exchange 2010, you as an administrator can recover these emails very easily. This is made possible by the new folder introduced in the 2010 mailbox, “Recoverable Items”.

Let me explain what happens. In my lab, I have an Exchange 2010 environment with 30 days “deleted items retention window”. A user deletes an email from inbox, goes to “deleted items” folder and empties it. He goes ahead and deletes it from “Recoverable items folder” as well.

Now, let’s break down the steps. When the user deleted the email, it was moved to the “Deletions” sub-folder and when it was deleted from the “recoverable items” folder, the email wasn’t purged by the store, but was moved to the “Purges” sub-folder. Both deletions and purges folders keep the emails for the deleted item retention window period, 30 days in my case. Hence, as an administrator, I can go ahead and restore that email very easily using the Exchange Control Panel.

In order for this to work for a mailbox, the feature has to be enabled. Run the command below to enable single item recovery for a mailbox

For all mailboxes to have this feature set, run Get-mailbox –ResultSize Unlimited | Set-Mailbox -SingleItemRecoveryEnabled $true

Now, set a comfortable deleted items retention window on all databases (14 days is the default) and you don’t have to look for your tapes for a restore, if it falls within the retention period. Moreover, a user can never delete an email completely, which cannot be recovered