In part one of this series, we discussed the AD/Exchange requirements for 2003-2010 coexistence. In this part, we will look at preparing the Active Directory, Exchange 2010 pre-requisites and introduction of the first 2010 server into 2003 org.

There are two options for extending the AD schema & preparing AD to accept an Exchange 2010 Server.

Run the following commands as part of the manual preparation.

Now that the active directory has been prepared to accept Exchange 2010, we need to think about the 2010 specific requirements. The following are the pre-requisites for Exchange 2010.

The order of introducing 2010 server into the 2003 Org is CAS, HUB, UM, MAILBOX, EDGE. Certain components like IIS, RPC Proxy, Admin tools etc need to be installed before we start the 2010 setup. For that, launch Powershell and run Import-Module ServerManager.

Run the following command for each role.

In our environment, we will be installing CAS & HUB roles on the 2008 R2 server named CASHUB. I won’t go through the installation steps one by one, as everyone is familiar with the process. Launch Setup from the DVD and follow the wizard with a custom installation option to install CAS & HUB roles.

Configure the “CAS External Domain” when asked during the setup. Enter the domain name for external client access as webmail.theucguy.net (2010 OWA URL in my example). The only difference here from a standard 2010 installation is the addition of one more option in the setup, when the HUB server is introduced into 2003 org. The setup asks for a 2003 server to be selected to create a routing group connector. 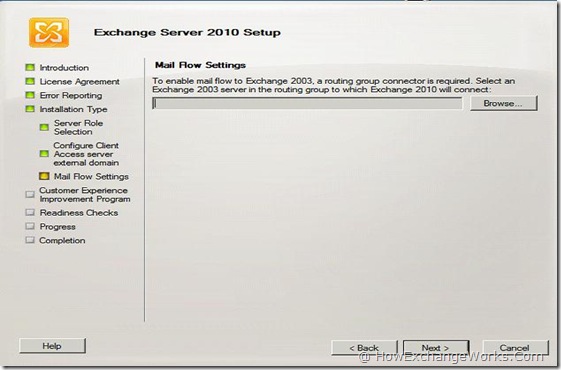 I selected the 2003FE as the bridgehead server for routing. 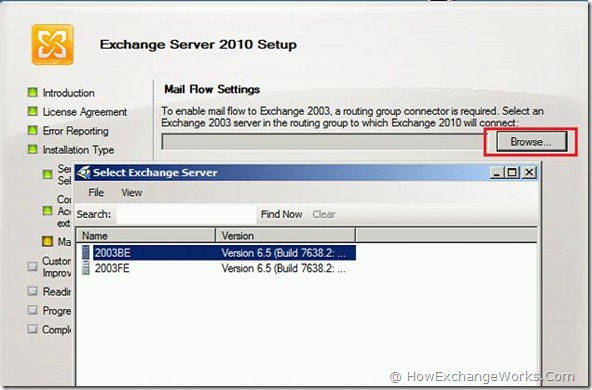