I got an email with this question – what happens when you create a DAG in 2010 SP1? The person who emailed was under the impression that a CNO gets created as soon as a DAG is created in EMC. Does it? Let me break down the process.

Once you create a DAG in the EMC, nothing much happens, atleast that is visible to an admin (unless you start looking with ADSIEdit). To explain what happens, I have created a DAG named DAG1 in my lab. 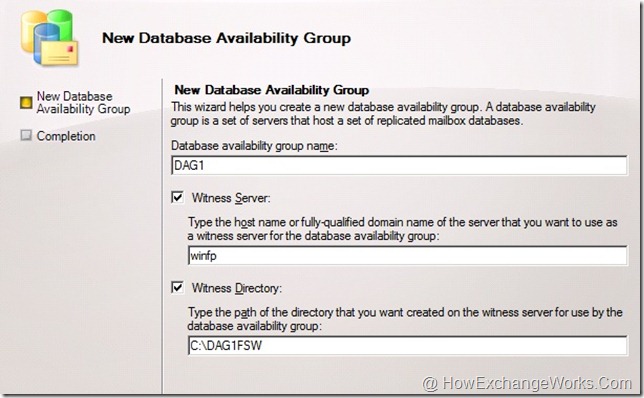 A CNO is NOT created in AD, once a DAG is created in EMC. Some admins expect a CNO and thinks that something has gone wrong. It will only be created once you add the first mailbox server.

The FSW that you have specified doesn’t get created now as well, only when the servers are added.

I added EXCH1 to my DAG in the lab. Now, things start to happen! A CNO with the DAG name gets created in the Computers OU in AD.

Windows Failover Clustering gets installed on the mailbox server. A cluster with the DAG name gets created and the quorum model is set to majority node set.

Once the second mailbox server (EXCH2 in my case) is added, windows failover cluster gets installed. The the cluster quorum mode changes to node and file share majority model. This switch happens automatically as servers are added and removed from a DAG.

The FSW has some contents in it now.

This will be removed if the number of DAG members becomes an odd number. Hence, as soon as you remove one of the server or add a new one, share folder will be empty. Nothing to panic, that is by design. The changes to the quorum model and FSW is controlled by Exchange and no changes should be made by an admin in normal cases.

All actions related to the DAG are logged in ExchangeSetupLogsDagTasks.

Hope the article shed some light as to what exactly happens when a DAG is created.